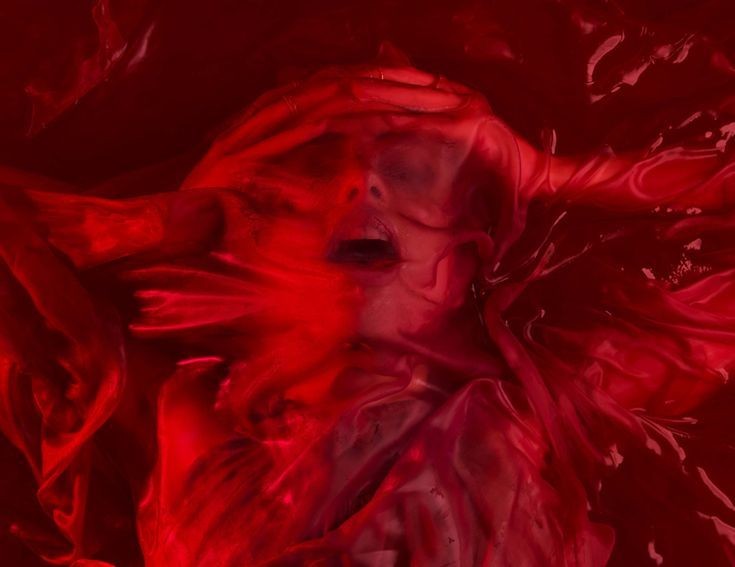 It wasn’t long before he couldn’t move at all.

Cool, thin latex stretching snug over his skin, he is sucked tight into the vac bed, two holes for the eyes, one for the mouth, and one haphazardly cut before to free his cock and balls for her to use and she saw fit.

She closes her mouth around the head, stroking her hand smoothly up and down his shaft as the air was sucked out from around him by the vacuum. Closing his eyes, he surrenders to the near indestructible material holding him still as he leaves his fate up to her. Will he come? Won’t he? Will she fuck him or not? Will she sit on his face and have him use his tongue on her? It didn’t matter what he thought and he loved it. It was entirely up to her.

‘Are you comfortable?’ she asks.

He tries to nod, but remembers that of course, he can’t. That’s the beauty of bondage, especially one as encasing as this. He has to use his words.

With a smile, she licks along the top of his tip with the flat of her tongue in one smooth stroke. He gasps. She giggles.

‘Tell me your safe words again,’ she says.

That smile that never fails to make him weak at the knees spreads across her cheeks, her eyes darkening.

His stomach flutters. He loves it when she calls him that. Opening a bottle of lube with a loud click of the lid, she pours a generous dollop into her hand. The cold slickness makes him shiver, gasping he struggles in his prison. They both giggle as she pours a little more over his chest and nipples, laughing at his squeals from the cold while she massages it into the latex, watching it shine so clear she can almost she her reflection in his chest.

His eyes wander over her naked body, her soft breasts and tummy now pressing against him as she leaned down to kiss him. Slow, deliberate, her tongue gently exploring his mouth; a soft moan vibrates in his throat. His cock grows even harder as she grinds her hips, running her clit up and down the length of him. Teasing her entrance at the tip, he tries to move his hips so he can slide inside her, like they normally did in the bedroom when she would go on top, holding her hips and lowering her on to him, meeting her halfway. But she moves away, grabbing her discarded t-shirt and pulling it over his eyes.

‘No,’ she says, dropping down to kiss him softly, her tongue slowly exploring his mouth. A low moan vibrates in his chest. ‘This is about my pleasure. You’re nothing but for me to use, do you understand?’

His world now cloaked in darkness, she slides just the top of his tip inside her, before pulling out again with a devilish glint in her eye. He whimpers.

Another short, sweet peck on the lips.

‘Good. Now don’t talk while I fuck you.’

Unless it was the safe word, of course; that went without saying, or if he needed to say something, anything. Safety first, always, especially when having oxygen sucked out around you with fitted holes only for sight and breath. They’d done this before and knew through sounds, movements as well as words to check in with one another.

She slides up his chest, her breasts crushing against his chest, sliding down to wrap them around his cock. They massage him, moving up and down in a steady rhythm, before letting one go and using her hand, twisting around the slick flesh, pumping him to an edge, before letting go. They both revel in his struggle, in his encasement, him revelling in the futile surrender, pushing him further into his submissive headspace. Hearing her move up the bed to straddle his hips, teasing the tip at her wetness, she lowers on to his cock, and she doesn’t waste time taking what she wants.

She bounces fast, taking exactly what she needs, what she’s been craving. Basking in her soft, desperate moans, his eyes close content under the cotton shirt-cum-blindfold. He loves that, the lack of attachment. Just using him for what she wants. Here he can give himself entirely in a different way than between the sheets in the next room.

Upon their bed, she leaves no stone unturned, caressing her lips over every inch of his skin. Each kiss is tender, their lovemaking vulnerable and passionate. His fingers run through her hair and he can hold her close, each thrust of his hips an expression he cannot put into words. Hot breathy moans rolling down her breasts as he massages them in his big hands and rolls his tongue over her nipples, worshipping with his body, his physical love an offering to the woman he sees as a goddess.

Here, latex stretched around him, holding him in place so soft yet so firm, he can give himself totally without barriers movement or words. The bonds free him to be what they both want and need. He can just be exactly what she needs in the moment she needs this. His hips involuntarily flex, but only so much. The click and scream of the vacuum fills in the room, and before long any air that has got into the bed is sucked back out. Any movement he could do before, he now cannot. All the while she bounces, grinding, squeezing around him, getting close. He feels her inner thighs shaking, her pleasure becoming more frantic as her climax washes through her, grating in her throat, possessed by primal lust that nearly has him coming right there and then.

He pants in his bonds, anticipation swirling in his belly. Will she have him come? As he loves, whether or not is if it gives her pleasure. He’s entirely at her mercy.

5 thoughts on “At Her Mercy”